Spells run through Google Translate a couple of times


Well, in my head I pictured bullet item 9 to be more exciting than it was - probably because Google always translates to English as a middleware-language every time (or so I imagine) - but my odyssey through Finnish, Chinese, Russian, Zulu, Thai, Norwegian at least produced some interesting new spell names:
Who are Aachen and Mark Oken? Mark Oken sounds like a 90s techno DJ from the Netherlands.
8 comments: Länkar till det här inlägget

G'day Mates at the G'day Gate 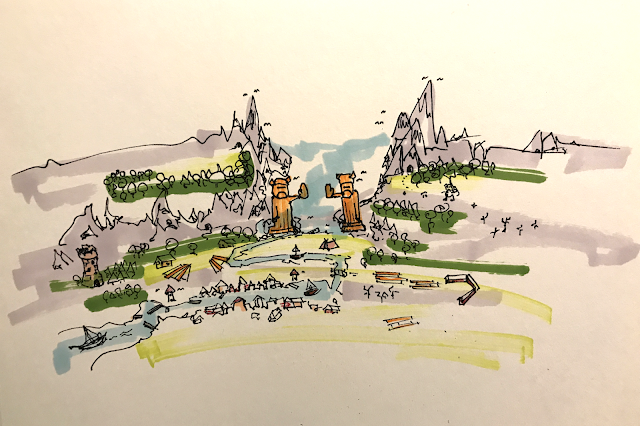 ELICIT HAVOC
You support or are drawn to that which bring the most destruction or desolation.


CATHODIC GOO
You support or are drawn to solutions/people that are really crappy but make things flow somehow.


AUTOCRAT LICHEN
You believe in Nature being the highest ruler, and are drawn to solutions/people that upholds that.


VIA FEW LULL
You detest quick decisions. You support or are drawn to the bureaucratic, slow moving, the "let's sleep on it" solutions.


GO AWFUL OLD
You support or are drawn to decisions taken by VERY OLD PEOPLE. The older, the better. Like, you know when their skin looks like tree bark - that's your compass in life.


A WALLET UNFURL
You are drawn to whatever people pay you to believe at the moment, but nothing's free, and that it works both ways.


LET I UNRAVEL
You do not believe anyone - everyone has a secret agenda. Even the kindest person in the world has another layer to peel, beneath which some sort of scheme is forming.


LONG READ OUT
You believe in old scriptures, written words, the longer the better, unless you have to read it yourself. Any idea that has been formalized in a orderly, cursive, written structure, is an idea you can support (though you may not have the focus to hear or remember it all, surely someone else did).


TAUTEN RULER
You support or are drawn to those that upholds principles; no grey areas, no second chances, paragraphs are there for a reason.
4 comments: Länkar till det här inlägget

CIRCLE
A religious class. A Circle lives after the following principles:


I, RUDD
People of the coast, of the sea, of where ever the ground is moist and wet and at least shallow. Possess great navigational skills. Can predict the weather (if close to water). Can hold their breath for extended periods of time if submerged in water.

Characters of this class lives in clans, all sharing the same surname, which is that of a specific fish (or amphibian). They can communicate with these in their own bubbling language.


FREIGHT
Characters of this class are experts of transports and bringing stuff along. They will always find a space left in their inventory for any item smaller than a clenched fist.

In situations that demand a specific item, characters of this class will nearly always (see table below) have it in their backpack, whether or not they packed it beforehand (as long as it's smaller than a clenched fist).
If smaller than a clenched fist, the requested item will be (roll below):
For some reason this does not include gem stones or coin. Trying to pull out a gem stone at the right situation (using the method above) will ALWAYS summon a tortoise instead.


AID PLAN
The project leader. The one of will get things done - if we only find these four or five people living very far from each other. She who knows experts in all fields - but is a master of none herself.

Characters of this class can always come up with a solution to ANY problem, but the solution always includes:
(Sometimes, one of the required person in the first bullet will be such a professor. Happy days.)

Solving problems without a written consent will be punished by death. There is no running away from the UNIVERSITY BOUNTY HUNTERS.


GARNER
The collector. Characters of this class are often excellent tradesmen, or runs little shops with strange goods and items, bought at cheap (or, "bought") and sold for a nice profit.

Garners have no moral.

Garners are sometimes compared to dragons in that they accumulate wealth, but unlike the dragon, a Garner does not wish to hold onto things for too long - a "stale" good, however expensive, is a lost profit if never sold.


RAGE MUSIC
The bard who never inspires, but may annoy and distract their enemies. When a Rage Musician starts playing (only in combat, otherwise they can't stand music, not even a whistle), they will play fast, hard and angrily for 1d4 rounds - after which they will smash their instrument to pieces:
During this musical rampage they are invincible, and hardly still (they will bump into whoever).


LUST IS IN OIL
The alchemist. Addict. Give them a day, an alembic, fire, and any four ingredients, and they will produce an oil of unknown effects - unless they drink it themselves (80% risk).


HE FIT
Characters of this class are excellent burglars. Legend speaks of the Ur-He Fit, the one who needed only a keyhole.

He Fit-characters lacks any strength. They are terrible fighters.


AN ASS SIS
Another religious class, only of no real faith. They make up a faith suitable to the current situation, so that it benefits them the most.


K, MON!
Characters of this classes may only be 16 years or younger. They can't feel fear. They dismiss enemies of non-humanoid types as silly - which is actually a strange kind of magic that uses Dismissive Psionic Waves to bring insecurity and annoyance to their enemies.

They are usually really good at learning things quickly, but they have no interest in displaying these skills when they are most needed.

They have like a lot of friends.
2 comments: Länkar till det här inlägget

WAR DEVS
You gain advantage when facing problems that involves patterns, logical thinking, and pushing tiny, tiny squares in a orderly, correct sequence - BUT ONLY during combat. You cannot think without adrenaline - when out of combat, you are really dumb.

You wear glasses. You have disadvantage at all times if not. They are not magical.

You may summon thick prismatic lines from a flat, square, abysmal black, polished rock. These lines bounces around the flat surface of the polished rock for 1 round, before materializing into reality, and start bouncing round in straight lines, like rays cast FROM BEYOND THE VOID. They deal very little damage. They may mesmerize any opponent for 2 minutes.


VS. LEE
You are a mook. You are never outnumbered - you are on the opposite side, outnumbering that lone, naked-from-the-waist up person kicking her way to the top of the tower, where your leader is. BUT YOU CAN CHANGE!

You have a vast network of contacts wherever you are. You only need to do a quick nod to get into shady establishments - proven that the bouncer at the entrance has that same grim look on her face as you do.


GEM SON
You are really tough. Like, rock hard. You weigh ten times more than everyone else.

Normal weapons cannot harm you, but watch out for pickaxes.

You can never heal, and you can never die. You can only become more and more divided, into smaller parts, until your conscience is too spread out and you become of the wind (or the muddy sea bottom). So watch out for that pickaxe.


FANG HILLS
You have no parents. You are made in the dirt by the tangled roots of the trees of FANG HILL, and you long for blood.

You have two abnormal long teeth. You can unscrew these and use as tools, or for climbing a hill side, maybe even the side of FANG HILL, or for tossing them at an enemy (treat as throwing knife).


MA SHUN
You are of the race of eternal children. You have never seen grown ups, and can never understand the concept of ageing. Any humanoid older than ten is a Giant Ma Shun in your eyes.

You are very shy among non-eternal children. Unless you cover your eyes in combat, you are paralysed and cannot act. Covering your eyes lets you perceive the world in a wireframe mode. You cannot see ropes or straight lines in this mode.
3 comments: Länkar till det här inlägget