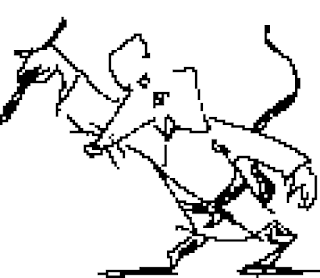 (boring remote work meetings are great for firing up PBRUSH.EXE in a separate window)
No comments:

THE RUINS OF 1KM1KT

Far into the future, a landscape barren and locked meets anyone foolish enough to traverse its domain. It is a domain of technology, of structured information; a country of subdivisions, of bold red and smutty grey, bordered and contained natural language, sometimes unnoticed, sometimes not, and each walled square a Moria for those brave enough to descend, for one does not know what echoes at the end; sometimes the answer, sometimes the end.

Those scholars that remain, spread out they are, much like their minds. Their memories incoherent, shattered like a multivolume ZIP-archive spread over too many floppy diskettes; ask them about yesterday and silence shall be your forever answer. Dare you ask them about last week?

But, there is still power left in these automatons; all that is needed is the secret word, and it is the word of the Creator and the Upholder, the Unnoticed Janitor, the Maintainer and Super User. Though crucial for this domain, speaking its name annoyed it greatly, so the symbols of the secret word must be spread out, as to not attract the attention of the Super User, and it all starts with a K.

And already, as the utterance of the symbol leaves your mouth, a spark of memory lights up the automaton's eyes. The second symbol being E, and the third a repetition of that, it is almost as if the symbols transforms the automaton's very appearance; and as the fourth symbol of T is uttered and enters their positronic brains, you've managed to awoken the long forgotten, dark banana peel that is their true simian soul.

And as you shape your lips in an oval form, and push out the fifth symbol with your lungs, a hairy arm is slowly raised from the dirty, asphaltic ground, pointing into the dead, bar charted horizon, where only read only memories are to be found. A single gnarly finger points.

The final sixth symbol, that of the letter N, completes the secret word, and with a final burst of energy, the now part automaton, part simian, utters a single sentence:

"YOUR MESSAGE CONTAINS TOO FEW CHARACTERS"

Lowering its arm, it then fall silent, slowly morphing back to its previous robotic appearance. It's as if it's been Dead, and Back, and now dead again, waiting for a second coming, for a second breakfast, only richer and fatter, to Feast like Goblins, the reInCARnation of itself - but its never coming to that ever again.

Once in a moon, like a fish in a bowl, it comes back to this very same spot, and stares into the write-protected horizon for a while - before moving on.