Short note to self: the flesh of zombies

What if zombiism were a disease that made you...
These zombies would eventually look like half-eaten corpses as people would try to chip of pieces of "medicine" from your body.

Background
Everybody knows of the Ruler of the Undead and Unholy, the lich of the west. The king that rules from his necrotic land of walking corpses, reanimates and ghastly horrors. Something as simple as touching the rotting ground with your feet may result in death, or worse. That's why you'd take the long way around. One day, a fat pigeon takes flight from the mouldy green castle placed in the centre of the land - high seat of the undead king. It heads directly in the direction of the nearest larger settlement, with a carefully folded letter tied around one of its fat legs.

A furry, one-eyed bone behemoth watches the pigeon disappear into the horizon. Birds make great stew, the behemoth thinks before returning to its black cauldron of unmentionable flesh.

To you: have you ever rescued a trapped KING? Follow the directions of the map. Find me, get me out and to SAFETY, and I'll REWARD you greatly. But HURRY!

The rest of the small letter is covered with a crude but surprisingly accurate map of the undead land, with notable land markings and suggested short cuts ("purple pit = good hiding place", "bone behemoth patrols here and here", etc.).


So what's the deal with this guy
Before turning into a king of all things undead, George William was a bored nobleman living in the city. He spent his days dabbling with potion making and torturing vermin. 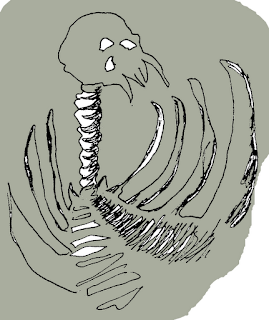 One late evening, after losing a bet to his drunken friends, George William swallowed down a strange concoct of past days experiments, turning him into a powerful but undead version of himself: the Ruler of the Undead and Unholy, the lich of the west.

Not being recognized any more, he fled and took refuge in a deserted piece of land no one seemed to care about. Over the course of the following hundred years, he slowly shaped it into his own liking of death and decay. The undead inhabitants of his new kingdom were bred from captured farmers forced to drink his experiments.

He built his green castle and surrounded himself with strange beasts to protect him. He was untouchable, like a baby in a cradle of bone.

But one morning, the king of the undead awoke to a mirror reflection he hadn't seen in years. He had reverted back to his former self; a normal, pale 17 year old nobleman with blonde hair. He even got his pimples back.

But now he was stuck in a necrotic land inhabited by hollow monsters, that lived to serve and protect the green castle where their beloved frightful ruler up until yesterday lived.
No comments:

Setup
Frank Jr. lives in an old apartment in the city. The last couple of days, he's been desperately seeking after someone that can rid his home of the poltergeists that haunts and taunts him verbally on a daily basis.


Frank Jr.
Frank is a tiny man, living in the middle class area of the city. He tend to blend in with the surroundings. He has a red scar on his forehead, probably after bumping his head. He has no recollection of it though.

Overall, he gives a rather confused impression.


Inside the apartment
Frank Jr.'s home is crammed with old, oversized furniture and horrible oil paintings ("that's my aunty Genna - and yes, she did enjoy eating irregularly"). Most people find it hard to breathe in there.

Poor old Frank Jr. will give anyone willing to help him a tour around the apartment. The poltergeists' voices can be heard anywhere from the floor to the ceiling throughout the apartment; the paintings, the old night stand or even little candles. They never manifest physically though. It's about three or four voices.


So what's the deal with this guy
Frank Jr. worked as a full time ventriloquist, before moving to the city and getting a "real" job. One week ago, he tripped over one of his fat rugs and hit his head against the kitchen table, and passed out.

When he woke up, everything about his former talent was wiped out from his memory, although his body hadn't forgotten.

Anyone paying close attention to poor old Frank Jr. while the "poltergeists" are speaking through the paintings and whatnot, might spot his lips not being completely still. He is in fact doing all the voices, although not to his own knowledge.

Helping Frank Jr. exorcise the evil spirits will be a hard task.
4 comments: