Cure disease, or each cleric his own drug

Whenever cure/remove disease is cast, the target must make a CON-save.

If failed, the disease became (or was already) resistant to this particular cleric/normal person's version of cure/remove disease. The diseased individual still suffers from the disease, and may only be cured by another person but this time with a penalty (+1/-1 or similar). The penalty accumulates.

The Fan of Stones Behind the Tower (map) 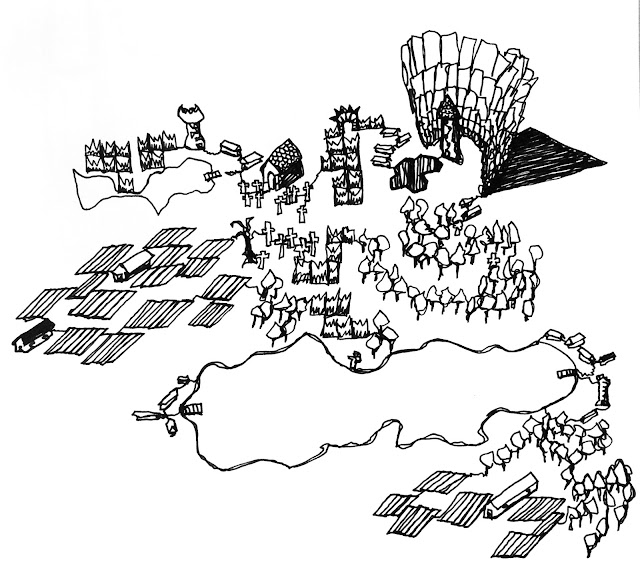 There are magicks that messes with everyone's head - literally.

When caught, nothing happens (not even the slightest stomach ache).

But somewhere in the world, there's a headless being out to get you. Its head - or rather, the schematics for recreating the shape and functions and most memories - have been transferred to your DNA.

It rests there, inside you, doing nothing, until the poor headless creature comes within close range of you and the schematics activates - and you start transforming into its head. The creature will then pick up and attach its head (you), resuming business as usual.

Some explaining mechanics if you want/need that

To randomly determine what type of creature loses its head: use any random encounter table/long list of monsters you've got at hand. It may very well be another human being. Maybe not a kraken.

To determine how far away the creature is: common sense, or 1d12 days of travelling by foot.

Ranges and their effects (point 4 and 5 above): when Creature B is within 10 metres, the transformation kicks in and will not be reversible. Other than that: assuming a person has two legs, two arms, one torso and one head, render one random body part useless for every 100 meter the creature closes in (reversible), starting at a 600 metre range.

The Matryoshka Effect: however highly unlikely, there will always be a small risk that Person A, while cursed, loses his/her own head due to another person being cursed, and so on, ad infinitum.
2 comments: