Ethereal swords that harms spirit and mind, but leaves the body untouched.

Roll to hit as normal, but for target AC use the attribute that the sword targets.

To create a sword, roll for appearance (two rolls), attribute and effect table (depends on attribute).

Appearance (roll twice; start with a standard sword)
1. S-shaped blade
2. Blade is like a wedge
3. Jagged
4. Blade is swirly, and engraved with a moral story
5. Blade is composed of stacked V:s (e.g. no pointy end)
6. Two thin, parallel blades
7. Filled with letter-shaped holes
8. Blade always seems to be pointing at the viewer, no matter the angle
9. Hilt is a living rodent
10. In windy places, the sword whistles
11. Blade is the length of a dagger, but the hilt is the size of that of a two-handed sword
12. Blade is impossible to sheathe

Targets this attribute (look up exact effect on its table below)
1-2. Intelligence
3-4. Wisdom
5-6. Charisma

Effects on hit: Intelligence
1. Releases one random spell (if applicable; otherwise nothing happens)
2. Target may only speak in verbs
3. Target's next move will be irrational and not very well planned
4. The common tongue is no longer understood by the target
5. Bleeds intelligence points; one point is lost per round (save ends; can't go below 3)
6. Target gets lost in an old riddle s/he suddenly remembers (save ends; unable to speak/react/move unless struck physically)


Effects on hit: Wisdom
1. Target gets a false memory about his/her current whereabouts; s/he will feel very strongly about it
2. Will only notice every other person in his/her vicinity (save ends)
3. Attacker shares one slice of his/her own wisdom, that is diametrically opposite of what the target believes in
4. Lose faith; start crying (save ends)
5. Lacunar amnesia:


6. Everyone's a stranger; every new face is a possible friend


Effects on hit: Charisma
1. The next person the target talks to believes s/he is lying
2. One random hireling/henchman of the target suddenly feels disgusted by his/her presence; will leave next night (50 % chance will steal something as well)
3. Turn undead will attract instead of repent
4. Target's party believes him/her to be a traitor of their current cause
5. 1 point of Charisma is spilled on the floor; it materializes into a ghastly rat and runs away unless the target manages to catch it (which will restore the lost Charisma point)
6. Every word that leaves target's mouth annoys the receiver (save ends; annoyance may build up to violence if going on for too long)

In the city of B, people adore and worship letters. Most of all, the letter B.

In the beginning, there was nothing but hope.
And then, the twice-pregnant came to B, and turned hope to land and C.
(from the city's often wrongly cited historical ledger)

Consonants are most valued, because they are hard and indestructible like the mountains.

Vowels are the soft seas between the consonants. Wishy-washy things not really meant for pronunciation; more like sounds of someone breathing. 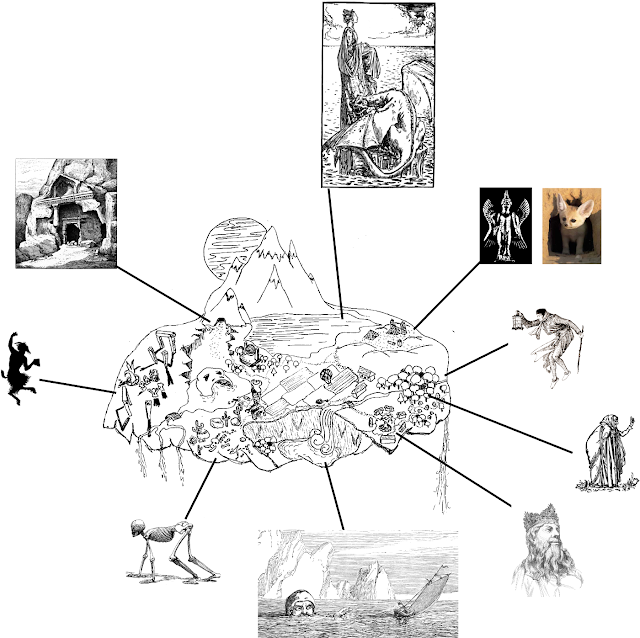 (Labels are missing because my player will see this. Andreas, the desert city of Bandar Karahc is in the top right corner.)

(And god jul, if you celebrate that kind of thing!)
No comments:

Or, rather, to make sounds with their throats that only differs from their usual babble in that it is more rhythmical.

So, goblins love to make sounds with their throats. During the high season of the annual common goblin cold, some are struck by another compulsive behavior: they need to spread these guttural ear diseases throughout the queendoms.

Forming a band of goblin carolers
Grab any number of dice (equal to how many carolers you want), throw them, and look up each die result below.

Instrument (even number-goblins)
Those who both sing and play an instrument, may (roll again):

The conductor
For a baton, this goblin use (roll again):

Titles of songs they may (try) to "sing"
Roll once for each column, combine:


These bands of goblin carolers travel the roads, sneaking up on people to perform their songs. They will sing 1d4 songs, after which they will attack their audience on sight.

A bunch of places and stuff


The Bottomless Forest (area)
Woodlands. Tropical.
A forest where the inhabitants lives in the tree tops, since the roots are carnivorous.


Witch Wart (settlement)
Plateau. Temperate.
A small agricultural society built around a huge, yellow monolith. The big piece of rock is said to belong to a witch that sleeps in the ground. A rumbling snoring can sometimes be heard at night.


Mooncardigan Fen (area)
Marsh. Temperate.
A large marshland, named after the Mooncardigan that's said to originate from here (a dark blue piece of clothing that sedates the wielder). The people living here lives in stilt houses.


Archfoot (area)
Flat. Cold.
This area is covered in inverted mountains in different sizes. Tiny giants are living at the bottom.


Trollbanetorp (castle)
Woodlands. Cold.
A group of exiled goblins have taken this place as their home. They're trying to live like humans, more or less successfully. They hate trolls and cookies with raisins.


Onrecht (city)
Desert. Hot.
One of the three trade cities.
A filthy and dangerous city. Built in layers in some sort of limestone. Rainbow coloured togas are very popular. Veils that protect against the glare of a gorgon (see Mierenhoop) can be bought here, although they wither to dust at midnight.


Mierenhoop (city)
Desert. Hot.
One of the three trade cities.
Not a city for humans, since everyone living here stems directly from a line of gorgons. They're not evil or bad people, it's just that it's rather difficult to trade with someone without looking them in the eyes.


Weegschalen (city)
Desert. Hot.
One of the three trade cities.
This whole city is a big bank. Mountain Kings patrol the "streets", tearing apart any thieves they catch.


The Frostwave (area)
Desert. Arctic.
An enormous (several hundred meters) frozen wave. Rumor has it that there's a rich city at the very top, unaware of the world below it. Peeking inside the ice reveals shadowy figures.