A case of the von Hohenheim

Anyone struck with this fever needs to seek out herbs and plants that resembles different parts of the human body, in order to cure that particular part.

Failure to do so may or may not end up with that part being replaced by the very herb he or she needed in the first place. This is referred to as the von Hohenheim-irony.
No comments:

166 metres tall, with many floors, accessible through a single round staircase in the middle.

Every hour, it cries out a random low-pitched mantra (repeated three times), consisting of three words:

Roll one die for each column, and read from left to right.

The building is basically a flytrap that uses the mantra to either attract or repel (depending on how many there are inside it) nearby creatures - charmed or disgusted by its sound.

Creatures inside the mineret will not be able to hear the booming mantra.

The mineret depends on the creatures to kill each other, so it can starts its digestion. All the rooms in the tower are undecorated (with the exception of undigested things scattered around) and unlocked - except for two special rooms found somewhere near the top: the Heart and the Mouth.

The Heart-room consists of a single locked wooden chest. Inside, a beating heart can be found. Damaging it will kill the tower.

The Mouth-room holds a single thin, semitransparent string, that runs from floor to ceiling. Cutting it will render the tower mute, and it will be unable to vocalise its mantras, and therefore be unable to eat. Over time, this will starve the tower to death.

There's also Foot-room somewhere at the bottom. It is unlocked and smells bad. 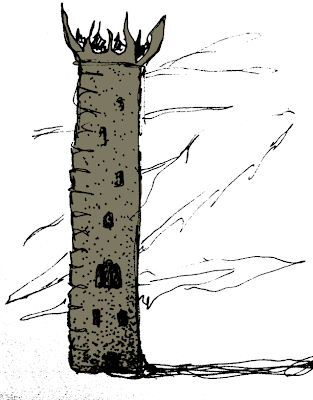 What the curator offered me

Believes she is a wizard, when in fact she's just cursed into believing that.

First round she'll always try to cast a spell (steadying hands, concentrating, whispering arcane words) - and will always fail. After that she'll use normal weapons.

If asked, will blame it on misaligned planets, wandering thoughts, or shoes too tight.