Last year (2013) I entered the One Page Dungeon Contest and won the category best fairy-tale for my entry The Giant's Dollhouse. While I plan/planned to explore the world around Pöppelmann (and the childish giant himself) a bit more, I also wanted to see how people with actual art skills interpreted the scenes in the adventure - just for my own amusement. This post is the result of that, nearly a year later (I'm the slow worker here, not the artists).

I highly recommend anyone to commission art for their projects, even if it's "just" for home campaigns or whatever. It's very inspiring and fun, especially when you hear yourself answering "Uhm...ehm...I don't know" when the artists wants to know why you gave the giant a hat, or why he only has one eye, etc.

I'd love to do another round of these!

NOTE: these images do NOT fall under the usual Creative Commons-license. They fall under the standard look how pretty they are here on this website, I should contact these creative people myself and commission them for my own projects.

I think Scrap really managed to capture Pöppelmann's inner (sadistic) child in this piece, happily playing with his newest acquisition (princess Amaryllis?). Only a mother could love that smile (Pöppelmann's mother, that is).

Scrap's blog can be found over here (but you probably already knew that). 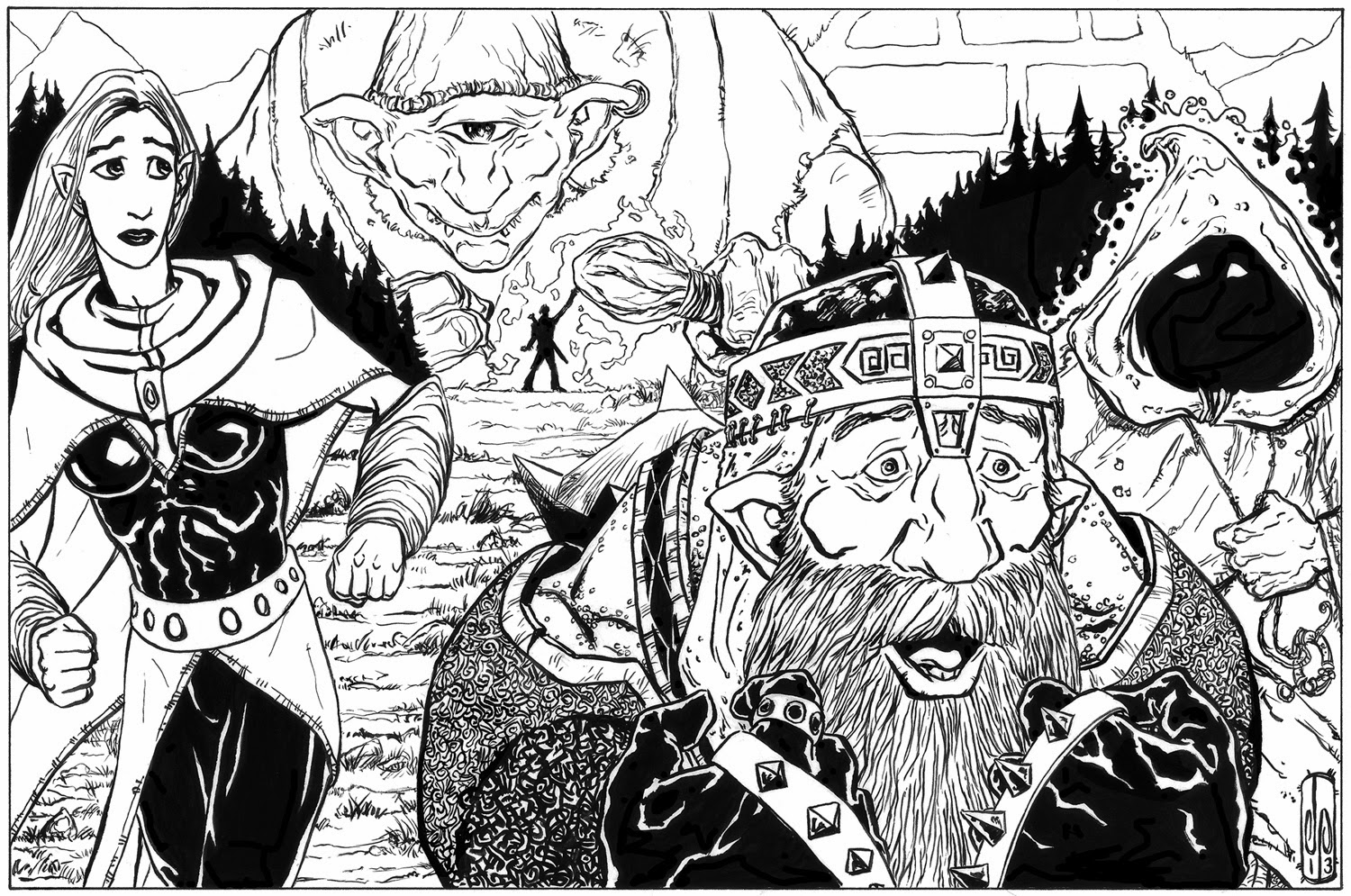 I've enjoyed Jay's work ever since I first saw those little potato gnomes in Loviatar, so I was very excited to have him do a piece. One thing I noticed just now is that those three terrified adventurers running away from Pöppelmann actually look kind of evil - like, "we're the evil version of the nice adventuring party". Maybe Pöppelmann is the victim here? And who is that poor fellow being left behind by his so called friends? I think I'm on to something here.

Jay can be found over here (but you probably already knew that too). 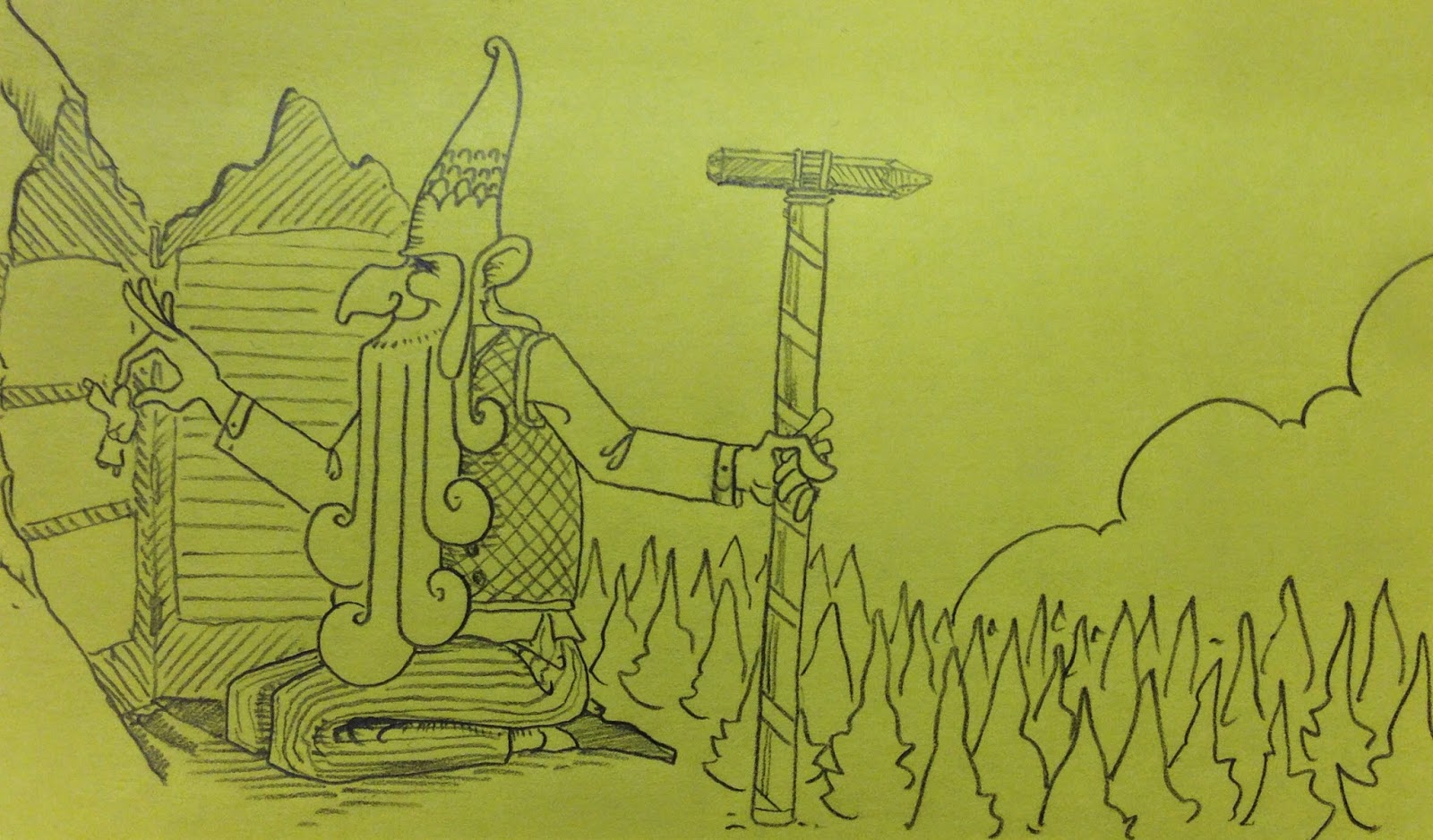 Luka takes speed-drawing to another level: I'd barely touched ENTER before he was finished.
I like the staff, it feels improved over the old a-gem-in-both-ends (it's so tiresome to flip the staff over just to petrify a puny human). And the cloud beard... I've never seen Pöppelmann so stylish. The hinges on the mountain side is also innovating; I can only assume there's a lock as well, to keep those meddlesome siblings away.

Or in his own words:


Pöppelman the Kindly and his dolls of eternal repose plays above the Seven Woods of Serenity on the flanks of the Fifth Mountain of Fortune.﻿

Luka can be found over there by the cauldron, brewing potions of ink. 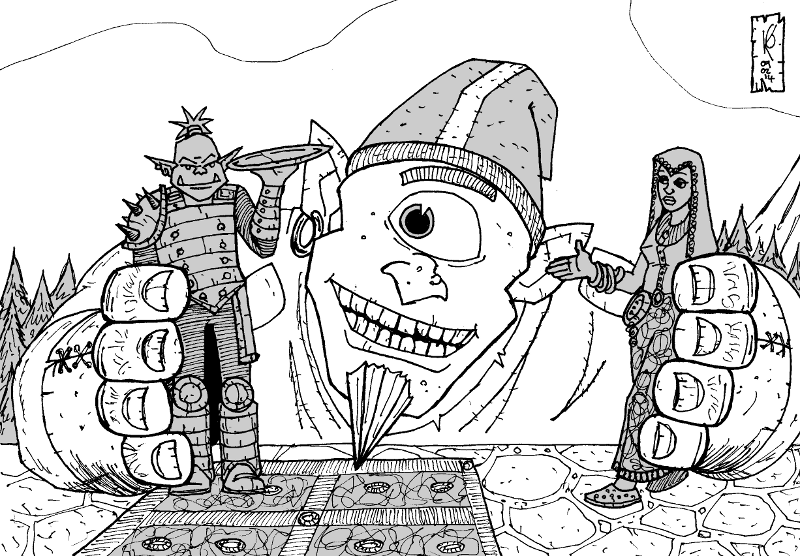 I think most of Kelvin's work seems innocent at first glance* - only to reveal a horrible backstory when you start to look closer. Here we have a peaceful Pöppelmann playing with his favorite action figures Ur'k Xiq't the Feared and Lady Darnton - the giant looks almost likable, until you think about how he acquired those "figures"...

You find Kelvin over at his brainsplurge. 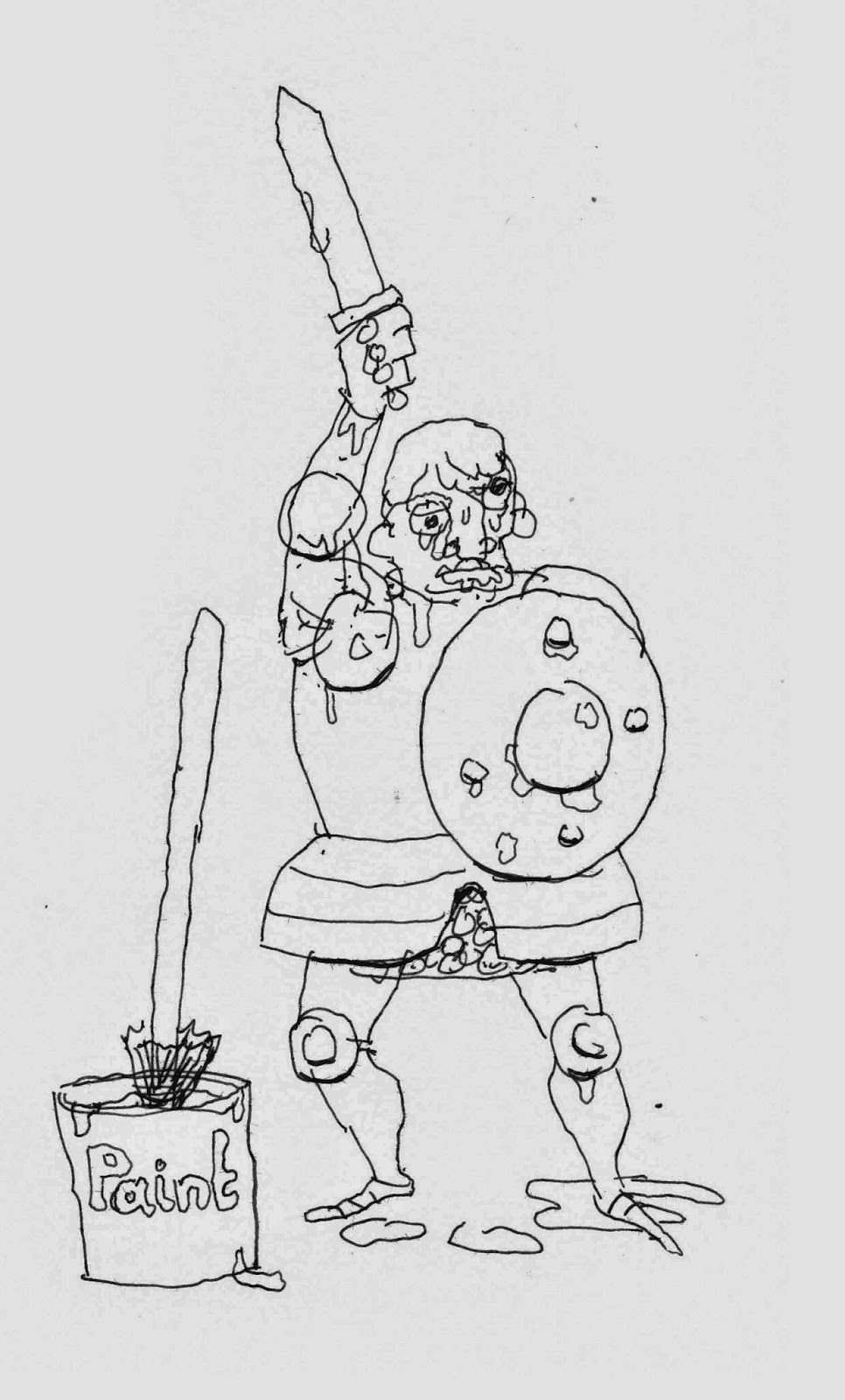 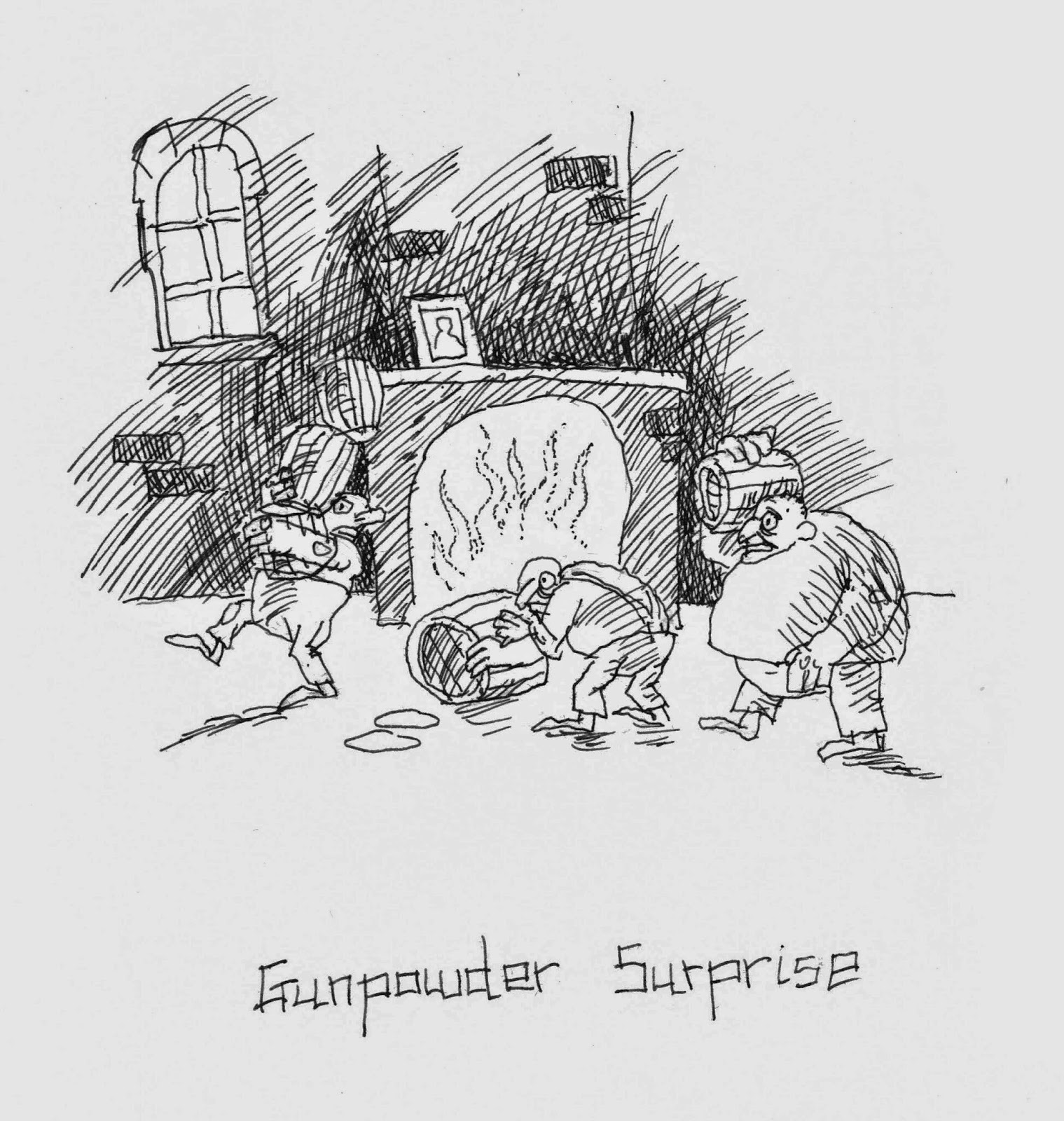 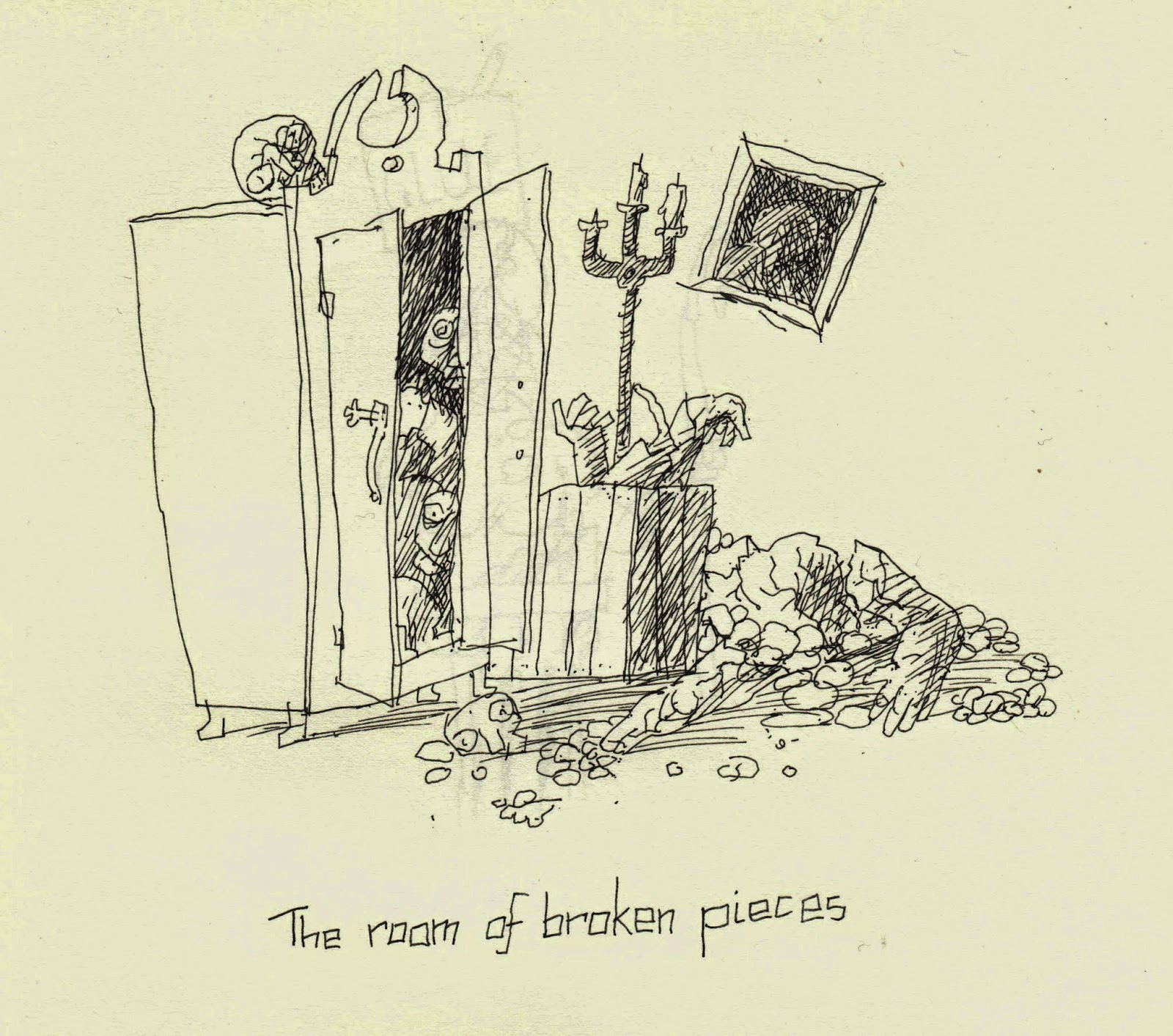 Matthew wasn't happy with his piece, so he sent me four (!) instead. He even provided his own wonderful backstories for the first three pieces, which I'll glady share below (from top to bottom image):

Human daisy chain. The giant has gotten some people to remove their clothing and to link up like a chain before turning them to stone. They are now a giant necklace that is sometimes worn for decoration.


Badly painted warrior. A statue stands here with a really roughly applied paint of coat. The giant was trying to paint one of his figures to use in a game, but lacks the skill to complete the job.


Gunpowder Surprise. Some military engineers transporting kegs of gunpowder were taken by the giant and turned into statues. They look good near the big fire, like workmen transporting barreled goods to the cellar. If turned back from stone, the startled workers may accidently drop a barrel of gunpowder into the fire. Players will not know what is in the barrels.


I think they work perfectly as adventure hooks. What if the giants announced a game tournament? Pöppelmann would be busy combing the countryside for humans to use in his figure warband.

Matthew can be found rumbling over here, or drawing war bunnies over here. 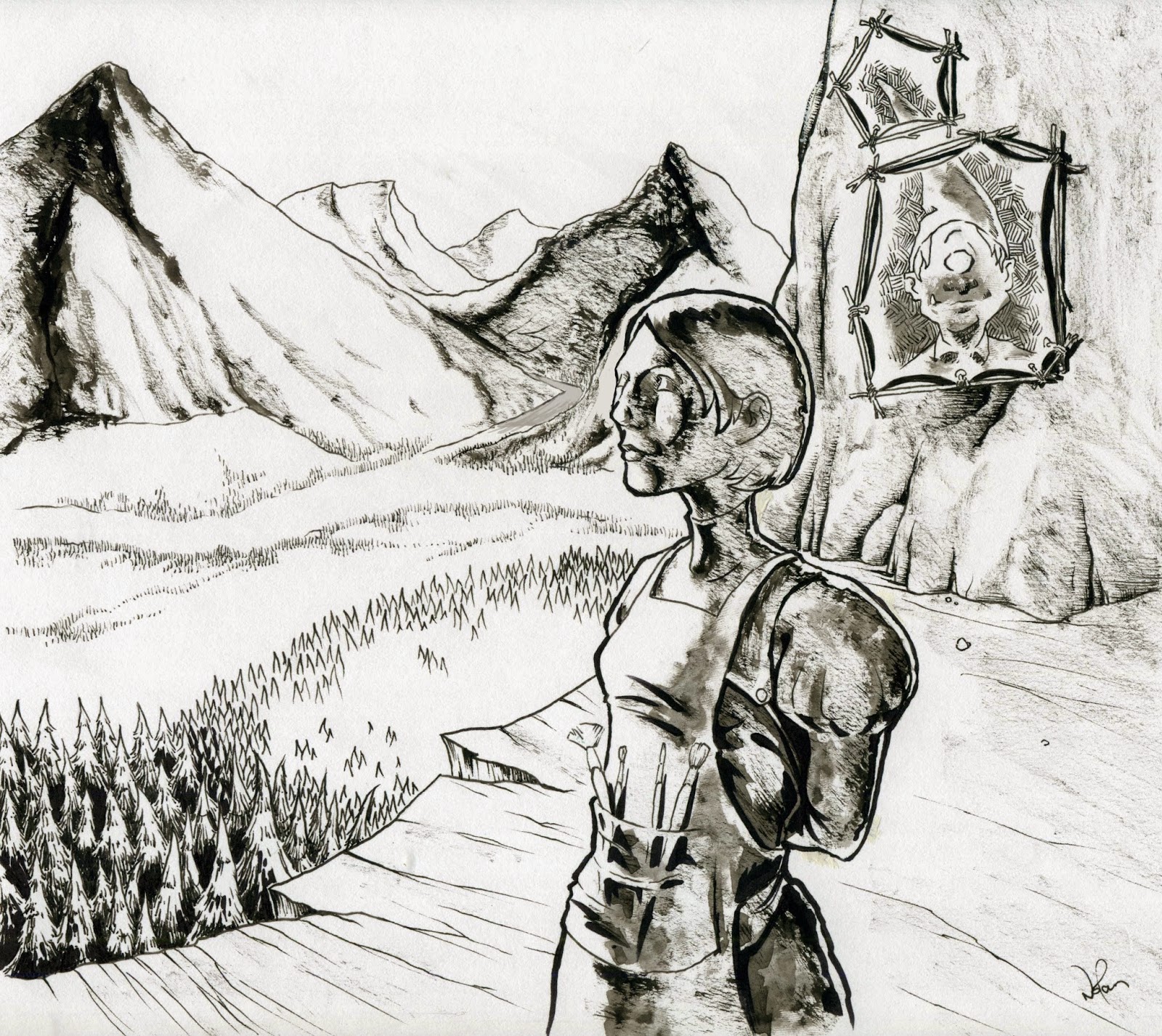 Working with Michael was really cool*, because all of a sudden you got a mail with a couple of sketches and a request for what I liked and didn't, and I could just write back and say "I like those trees in the first picture, and that hairdo in the second, and that mountain range in the third" - and all of a sudden one day, I had a picture with all those requests perfectly merged**.

(* Working with all these artists was really cool, you know what I mean!)

(** Maybe this is standard practice in the world of commissioned work, I wouldn't know, but it made me feel like a kid in a candy store.)

The woman pictured is Sister Tenderteeth, who painted the portrait of Pöppelmann (the one that hangs in the bedroom, also in the image). I love the details he managed to fit in the picture.

Michael has a blog over at his memory place, and a Behance page here. 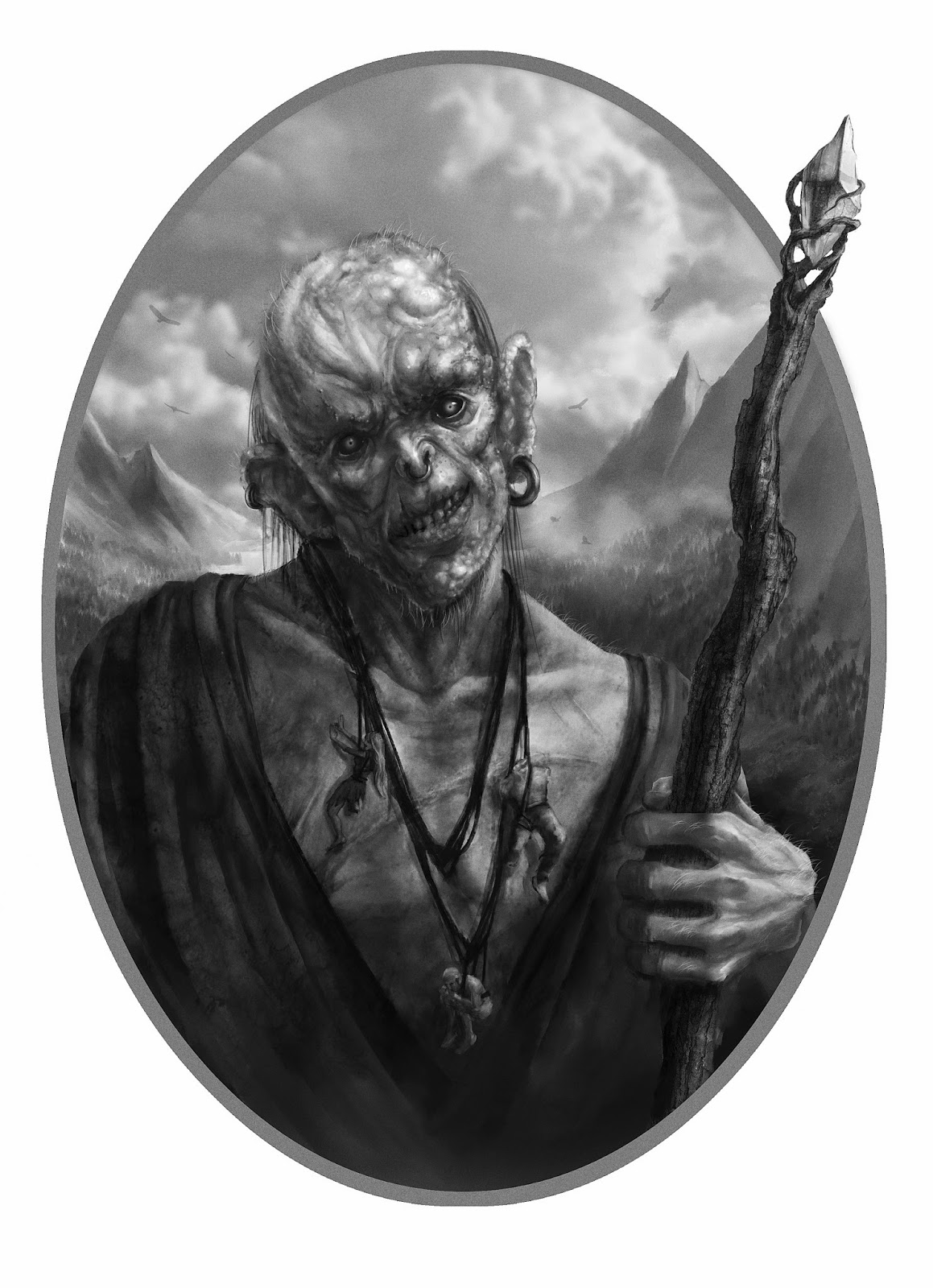 I was very happy to find Karl-Johans page (a fellow Swede!), even if it was by accident. Since I told all artists to interpret the adventure freely, Pöppelmann got a complete set of eyes in Karl-Johan's piece (good for him, but that stare scares me to death). I find the necklace especially interesting, considering Matthew Adams human daisy chain - does Pöppelmann come off as extremely vain?