Imp peddlers can be found everywhere, from the filthiest, most crowded street corner, to the loneliest road beyond the mountains. But you'll only find them when you're not looking for one.

They sell imps, more precisely the short-lived, chaotic devilkins most folk don't want nothing to do with. The peddlers don't have a stock of imps, but will conjure a fresh one for each buyer (after payment, of course).

The conjured imp will obey its new master most of the time. That is all that is known to the player. 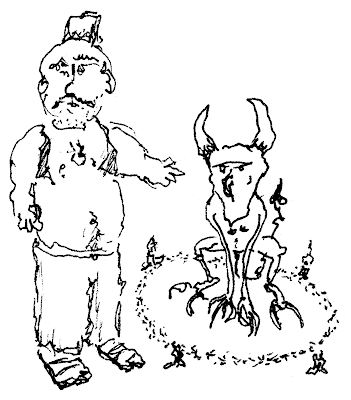 Creating the imp
The imp will live for 2d4 days.

After this, it will:

But during its lifetime, it will Crave and Fear an item from the following list (roll for both):

Imps are actually capable of scheming, despite common belief, but they're pretty limited. Roll on the table below to get the imp's hidden agenda: