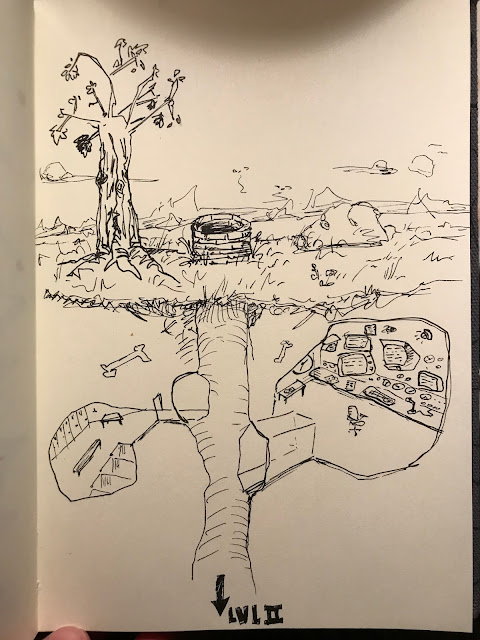 Who's lurking in the woods? 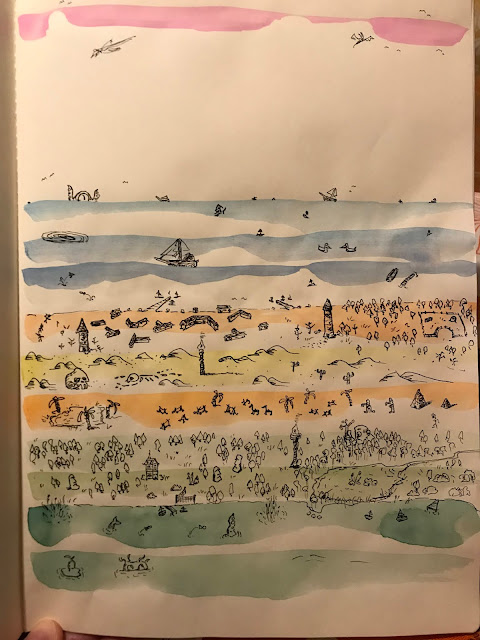 Had a lot of coffee today, so I... Anyway, have a map! Follow the tag to see more in this series! 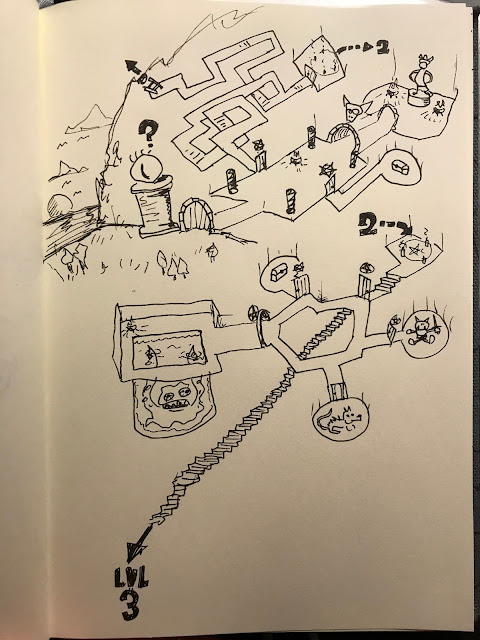 It Starts To Burn: Easy Rules for Solo Play

I was thinking about solo play the other minute, which is something that's always fascinated me (how to keep oneself interested in what I've already thought of? etc.). I have zero experience with solo play frameworks (I can't remember any at least), and since I have nothing better to do, I thought I might as well take a stab at it.

So here is my attempt. I call these framework IT STARTS TO BURN.

I guess nearly all game frameworks need a way to resolve conflict. Anytime there's a need to resolve an uncertain outcome, or a decision needs to be taken "objectively", roll 1d6 and and consult the following table:

And that's it. Comment below if you want me to provide a method of how to convert this other die types.

Write something down. Unfortunately, at the moment, all characters in this framework must be called Amen Vafan (I plan to release a compendium later on with rules on how to name your character differently).

Current objective: "My rat's down there - I need to save it!!"

After my long rest at the hard, cold, stone floor, I arise again to face the never-ending hordes of skeletons and undead in this nasty tomb.

I open my backpack and indulge in some of the food I brought with me, hoping it will restore some my health.

Oddly enough, the cheese wedge in my hand starts to burn, and I hurry up and eat it before it burns my tongue too much. Knowing the farmer, I must say this burnt taste was sadly an improvement.

I pressed on, torch ready in hand to light my way through these dark hallways.

As expected, the torch is well alit and aburning and eh ailluminating my surrounding area. Unfortunately, the whole torch is burning, and I must hurry to the next intersection before my hands light up.

Some moments later, I arrive at what must've been some sort of combined armoury/library/kitchen/sleeping halls/passage to lower levels - very common in these kind of tombs.

A rat! Alas - not my rat. This one was walking upright, clad in armour, and had a foul appearance (besides being a rat). I knew not if it had yet to notice me.

Strangely enough, the rat's suddenly engulfed in flames - a fire rat wizard! Or rat fire wizard! It turned around and faced me with a grim look on its face, spun its little furry paws as it prepared to cast a spell and let it go at my direction.

I immediately threw myself to the left to avoid the foul magic, and landed on a combined table/bed/book case/stairs down.

And the combined table/bed/book case/stairs down caught fire, but at least I had avoided the spell successfully.

As a reaction, I grabbed first thing from my backpack and threw it at the fire wizard rat.

As the thing hit the wizard fire rat, it started burning a second time, now twice engulfed in flames, alit atwice, and could not see anymore. It stumbled off in another direction, I could not see which due to all the smoke and flames and fire, but I cared not, because to face a wizard rat fire is to surely meet one's doom.

I quickly descended the stairs to the next lower level.

I hurried up the descension to not burn my feet, and as I reached the stone floor on the lower level, the stair case was all alit from atop to abottom.

I pressed on, since the search for my rat was far from over... 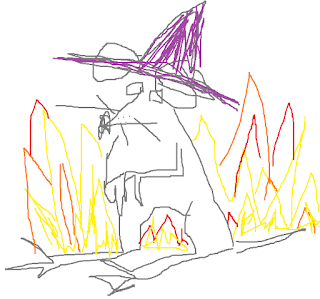 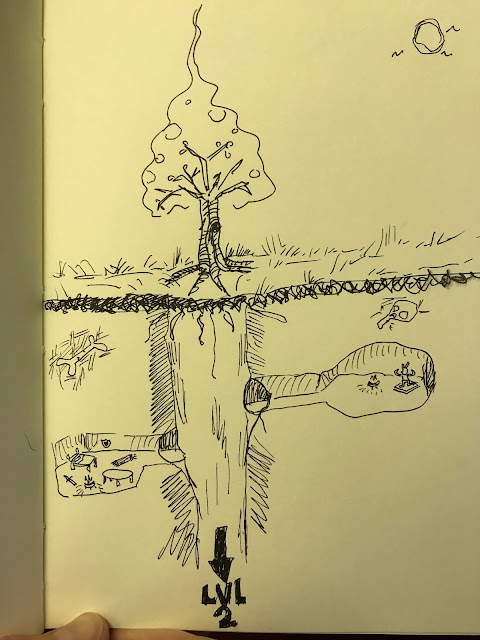 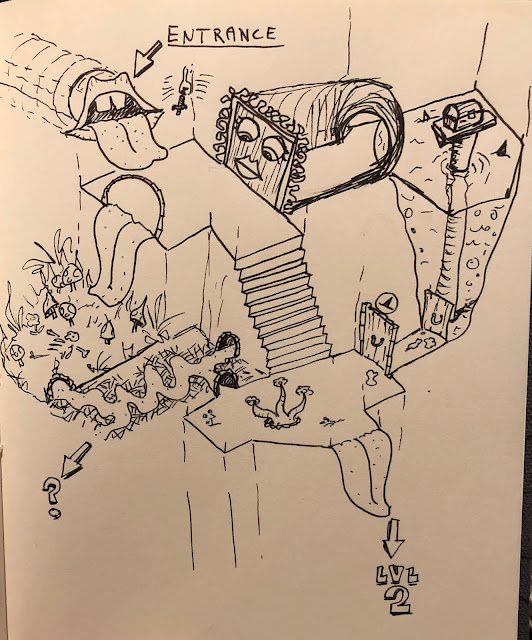 Another dungeon done while... Anyway, have a map! Follow the tag to see more of these.

There are probably hundreds or more slick, fun, useful ways of generating dungeons, and populating them for fast, great use at your table.

This is not one of those, but I'm bored, so here goes.

There's one method we practised at work one time during team building (that we never used again, probably pretty typical for team building workshops) that had you constantly ask "Why ..." five times in a row to a given statement. For instance, you start by describing a simple problem, then you ask "Why is X causing Y" or "Why are we XYZZY?", and you get an answer, and then you reiterate with another "Why are we ...." based on that answer.

This has probably been used in RPG map making before, but I wanted to try it anyway, and I wanted to infuse some strange randomness into it whole by utilising my bookshelf in the process.

But first of all, I need a map. I'm thinking simple since I don't have all night for this post: 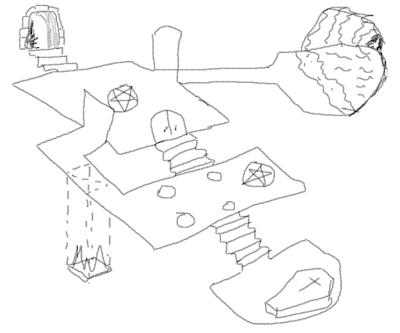 So my main idea is this:

I'll quote whatever sentence I find, but I'll need to (badly) translate them from Swedish so sorry about that.

Q: Why is there a STATUE in the first room?

Q: Why would someone need access to the Wells of Knowledge?

A: "Jag läste i tidningen att någon var död, någon som jag kände till namnet"  --> "I read in the newspaper that someone was dead, someone I knew by name" --> Because it can answer questions about deceased people using only their names

Q: Why would someone need answers about deceased people?

Q: Why are the doors closed?

A: "Jag skulle aldrig ha väntat något sådant av honom" --> "I would never have expected something like that from him" --> Because there is a man that can't be trusted behind the doors

Q: Why can't the man be trusted?

A: "Han var ännu gråare i ansiktet än vanligt" --> "His face was paler than usual" --> Because he is dying

Q: Why is the man dying?

A: "Ljusen brunno med smutsröda lågor mot den grå gryningsdagern" --> "The candles are burning with dirt red flames against the grey dawn" --> Because he performed a ritual involving red candles that affects daylight

Q: Why did he perform that ritual?

A: "Mina sinnen vaknade först sent, vid en tidpunkt, då min vilja redan var en mans vilja" --> "My senses awoke late, at a point, when my will were already that of a man" --> Because he needed to mend his body and mind

Q: Why did he need to mend his body and mind?

A: "Vad var det för folk där?" -> "What kind of people were there?" --> Because his mind was shattered and shared between multiple persons

PASSAGE THAT ENDS IN WATERFILLED CAVES

Q: Why are the caves filled with water?

A: "Gubben gick och la sig." --> "The old man went to bed." --> Because someone fell asleep on the job preventing the caves from flooding

Q: Why did someone fall asleep while preventing the caves from flooding?

A: "Han stönade och jämrade sig medan han kravlade upp ur snön." --> "He moaned and wailed while he crawled up from the snow" --> Because he was buried in snow and started hibernating

Q: Why was he buried in snow?

A: "Han var tvungen att göra sina bästa konster för att de överhuvudtaget skulle titta på honom" --> "He had to perform his best tricks to even get them to notice him" --> Because he tried to cast great illusionary spells to impress some gods

Q: Why did he try to impress some gods?

Q: Why is there a pit trap in the hallway?

A: "Människor, det häver sig i mitt bröst" --> "People, my chest is rising" --> Because the spikes are growing like plants in this pit

Q: Why are the spikes growing in the pit?

A: "Några sista stjärnor lysa matt" --> "Some last stars shine dull" --> Because they yearn for moonlight

Q: Why are they yearning for moonlight?

A: "Jag sörjer så som hade jag förlorat en sagokrona" --> "I mourn as lost a crown of fairytales had I" --> Because the spikes are lost ornaments to a great fairy crown

Using an overly simple map was intentional, and I think - if you for some strange reason decide to try this yourself - one should ask questions about the most mundane things in the map, because that gives the most flavour; I mean, I put a statue or two in there, of course they're going to indicate some special thing, so asking WHYs about them is not that very exciting. But let's say you ask WHYs about an ordinary wall, or the ceiling, or just a door frame - mundane things that NEEDS to be there anyway - what could this method bring forth?

(And my apologies to the authors above for thrashing their penmanship with my horrible translations.)