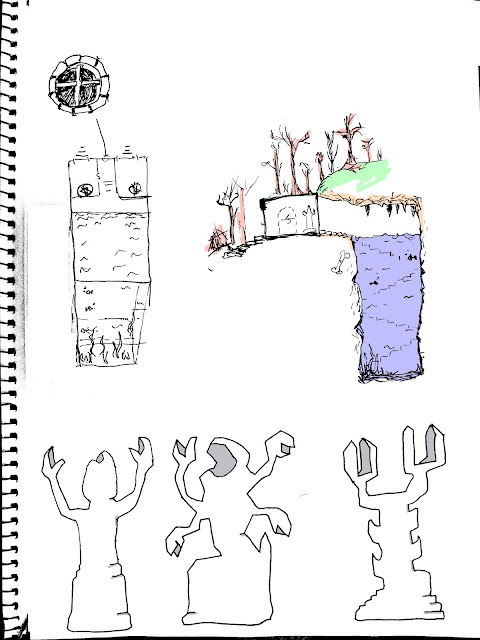 So this site is just some simple (from the outside) two rooms shrine (two separate doors). It is built in stone, but lacks all sorts of ornaments.

In each of the two rooms, a statue is present. There's nothing special about them; bog standard "important man looking into the distant, not knowing where to put his arms". One is missing its nose.

The round, barred window is located in a space between the front doors. It should give a hint to the "hidden" area between the two rooms. There are no other light sources inside the shrine.

In one of the rooms, the entrance to the (now hidden) area has been bricked up long ago by the original worshippers of the shrine, in an attempt to imprison the Changing Beast they managed to summon one night.

The flooded area has a narrow (30 cm wide), winding staircase following the four walls, leading all the way down to the bottom (30 meter). This area wasn't always under water.

At the bottom, besides broken pottery and glass vials, the following things can be found:

The skeleton remains (item 4 above) is the poor sod they left behind to fight the Changing Beast, who managed to defeat the beast by breaking up its soul into the three silver figurines using the once magical sword (now broken, item 5 above).

The three figurines depict the three different shapes the Changing Beast could take on: man, beast, and something alien and otherworldly.

Selling off the three figurines will require some persuasion, since the figurines makes most people uneasy.