(Read the first part here, or just follow the tag for all posts in this series)

So for this part of the series, I'll create something small, like a wizard's tower, to have something to build on later, e.g. after the tower is completed, we can create a milieu/environment around it in close proximity, and see where that leads us i.e. to place other things, and so on and so on.

I'll use my Building a wizard's tower using 1d20 and maybe some other dice post for this.

(And apologies in advance for all the times I'll misspell the word entrance.)

Following instructions, or Doing What The Generator Tells Me To Do

"Get a pen and paper" - alright, I'm already not following the rules. I think I'll use Google Spreadsheets instead.
"Start at the bottom" - how can I do that if I don't know how many floors there'll be? I'll just do a reverse tower. Wait, will that make it a dungeon? Is this a dungeon generator in disguise? Or maybe there's some function to reverse all cells later...hmm...maybe this is why I'm told to do it on paper... Anyway, I'll just start at the top, and do it in reverse instead.
"Keep rolling on this table until you're happy" - WILL I EVER FIND HAPPINESS har har alright enough goofing around, let's roll on this table until we're happy.
First roll (thank you, random.org, since the rest of the house is fast asleep): 16 -
Does the tower have at least one balcony?
Nope, can't say it does. It doesn't even have an altan as we say in Sweden.
Next roll: 6 - Find a die that matches the number of floors pretty good
Eh, ok, I'll do that. I got my 1d1 right here. Oh don't look at its flipside, or you'll lose your sanity.
Ok, now what? "Roll twice". Yes, I think I can manage that without random.org, rolling... Oh, look at that, I got a one and a one. What does that mean? "[...] connect those two floors on the outside by means of: Wooden staircase, crude and unreliable"
Why did I have to roll twice? It's not like you have to install two staircases when you're building in the real world; one for going up, and one for going down. This entry needs an editor, I'll get one asap, but in the meantime I'll just connect the entrance with the entrance by means of a wooden staircase, crude and unreliable.
...I'll just use the best of my imagination for this:

Ok, next roll: 11 - Add a floor on top. LARDER.
And two d6 rolls after that:
All in all, another UNEXCITING floor. I mean seriously, I know it's called a larder, but for heaven's sake, store something else in there will you. Why would a WIZARD dedicate a complete FLOOR to storing LARD of all things or wait a minute.
Wait a sentence.
Of course it could be interesting. It wouldn't be interesting if a NORMAL human being would store that amount of lard, unless they were a lard lord or lard master or whatever title you'd have in a pseudo-medievil setting (I mean, imagine if this was a normal person's tower with just two floors; you got an entrence with a staircase going around the house on the OUTSIDE, and an attic full of LARD - that's not how you start a family is all I'm saying).
But now we're dealing with a WIZARD. Wizards are crazy, there's no denying of that. I mean, the entrance floor is sound proof of that ("So... there's no second floor?" - "No no, just wrap the staircase around the tower, will you please!")
So, based on that, my imagination tells me this: 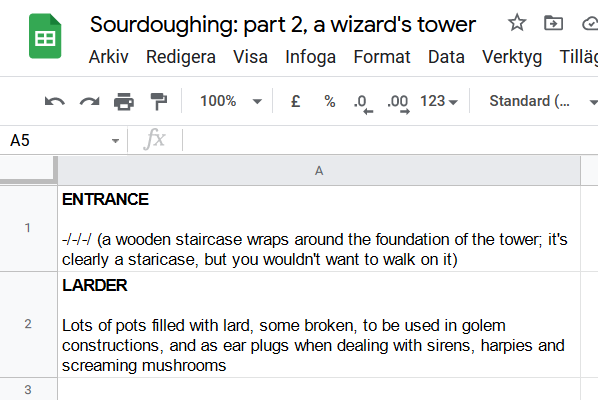 Alright, next roll: 10 - Add a floor on top. BEDROOM
Yeah, sounds about right, you don't want to walk all those stairs when you're an old sorcerer.
Oh, another d6 sub table: 6 - Moss is covering the entire floor, although the furniture is still underneath somewhere. The wizard falls asleep where ever
Sounds like a parent with young children to me! Ooh, that gives me an idea:
Alright, on to the next roll, or should I stop and reflect here? Maybe I'll reflect instead.
I remember writing that post, that generator, thinking one would run through it a-blazing, thirty floors in one minute, e.g. if I hadn't at least twenty entires, it wouldn't be enough. More more more. But as I use my own generator myself, I notice even the slightest - what should I call it - "insinuation" (i.e. as with the moss thing above, that made me think about why wouldn't the wizard clean that up etc etc), may or may not stall the process (for the poor reader/user) by some amount of time.
Or maybe it's because I'm blogging at the same time.
Or maybe because I'm having my first real beer in several months, and my body is all confused, and my brain can't function.
Anyway... Enough reflecting. We'll see if the editor cuts that section or not.
Next roll: 11 - LARD- are you kidding me? No, just no. I need to write an addendum to that blog post. I mean, yes, some floors could benefit from repeating, but a larder? Alright, I'll add it. I mean, one point of this series is to point out how stupid one's generators could be: 5 and 3 - Broken pottery, dry ingredients. Some of fey origin.
Alright, so maybe the wizard doesn't consider the first larder-floor to be a larder at all, but merely a "ear plug resource/golem ingredient" floor, and this floor is just a pantry? Yeah I'll just rename it to pantry: 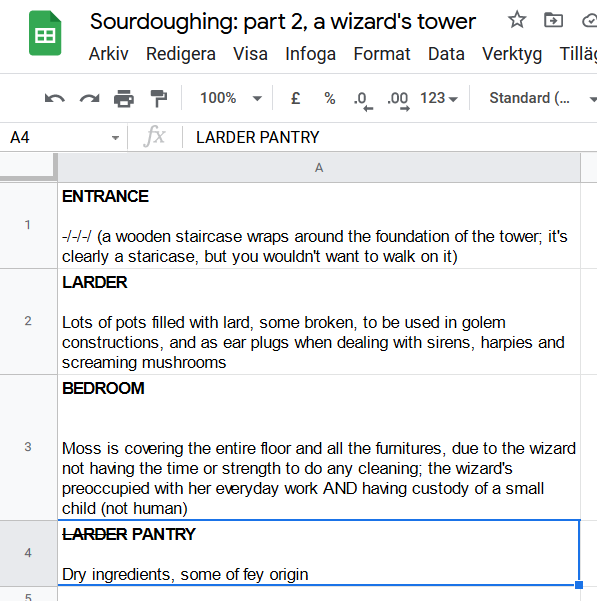 I have to say, imagine being a sorcerer yourself, or just a plain pig farmer, and you have been invited to a "wizard's tower" - and this is what you see? A messy bedroom and food stuff? This is why common men become fighters, or clerics; they see this tower and go "screw that".
Ok, next roll: 14 - Find a die that matches the number of floors pretty good, and roll.
Ouch, I mean, yeah it's pretty boring tower so far, so some random change could do us good, but on the other hand... I got a pretty good view of this wizard right now; it's like the reverse of the common "Oh I'm living a common normal life, but I want to become powerful and taste the dark arts yada yada", like "Oh I'm a powerful sorcerer and imps are running around my legs, let's start taking things down a notch one at a time").
Ok, I found a die, let's see what floor we'll manipulate: 2 - LARDER. Oh goody.
Another roll (d6) to see how we'll mess it up: 6 - There’s a lot of barrels here, where plants and edible things are growing. A tiny cloud is circeling the ceiling, keeping everything wet and fresh
Hmmm.... I don't know, oh wait, I do know. I mean, if the lard in the pottery is for golem construction, why wouldn't the things growing in the barrels also be for that? I mean, maybe it's golem hair or something... Or brains? I mean, some kind of tangled weed may be used for a golem brain? Ok, that's good enough for me: 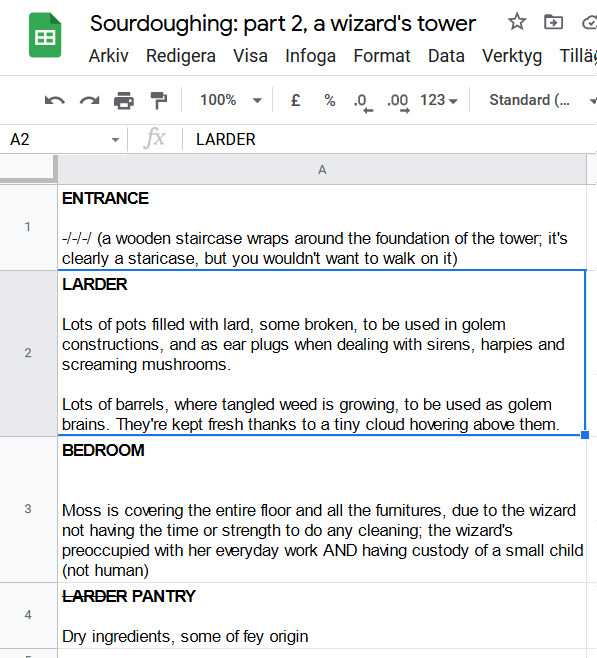 Alright, on to next floor: 4 - Add a floor on top. STUDY.
Yeah, every wizard needs a study. What's the major theme? 2 - Books about famous paintings, and what hidden magic they contain
I get it, every first time parent are looking for that "hidden magic" about how to raise their child "correct", and this wizard obviously has something extraordinary on her hands, so a full study dedicated to dealing with that little monster makes perfect sense: 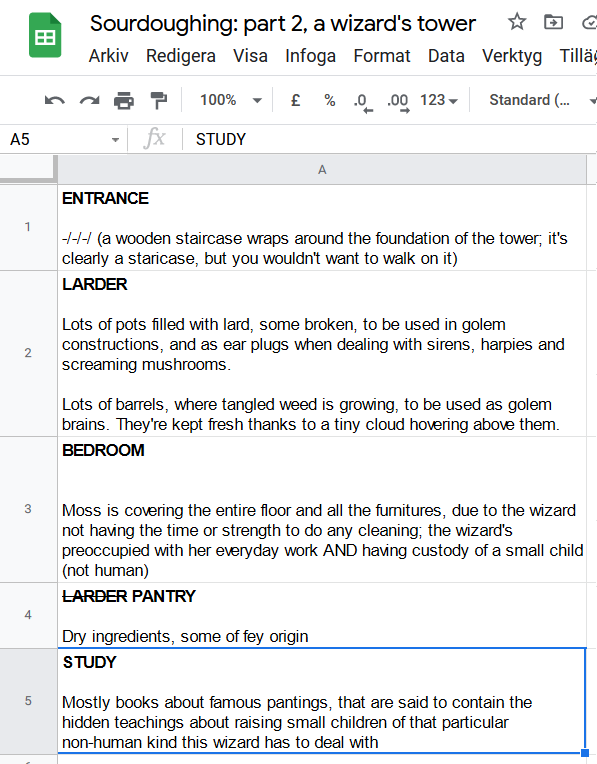 Now I'm thinking; has this little child anything to do with the golem construction thing going on in the second floor? Hmm...
Anyway, next roll: 16 - Does the tower have at least one balcony?
Nope. I should probably have given that entry the possibility to deal with "if no balcony, do this instead".
Ok, another roll: 4 - STUDY.
...yeah ok, wizard likes their books, I get it, I'll play along. What major theme this time? 4 - Books about common potions that somehow all requires birds as an ingredient (multiple beaks can be found in here as well)
So, "common potions", I reckon these are potions that all wizards know how to brew, but these require birds as an additional ingredient. Does this mean someone set our poor wizard up? Sold her bad recipes? Who would benefit from this? "Oh, a potion of heal sprained toe is just moss and fly agaric - but I'll toss in a house sparrow just for the fun of it!"
No wait, it makes perfect sense. Either our little monster/non-human child has something to do with it (i.e. scribbling all over the potion book), or someone who hates birds and want them eradicated from the area has sold these recipes to wizard.
Hmm, I kinda like that latter explaination. Birds eats worms, ergo worms hates birds, so an earthworm in disguise has sold these phony recipes to the wizard!

Will this tower do? Am I happy now, as the generator clearly asked of me to be in order to stop? I don't know, how much detail would you possibly need from a wizard's tower? I mean, I have a pretty good sense of this wizard now, even though there's only six floors:

I mean, I'd love to explore the idea of that earthworm, or that child-like creature - but do I have the generator for that?