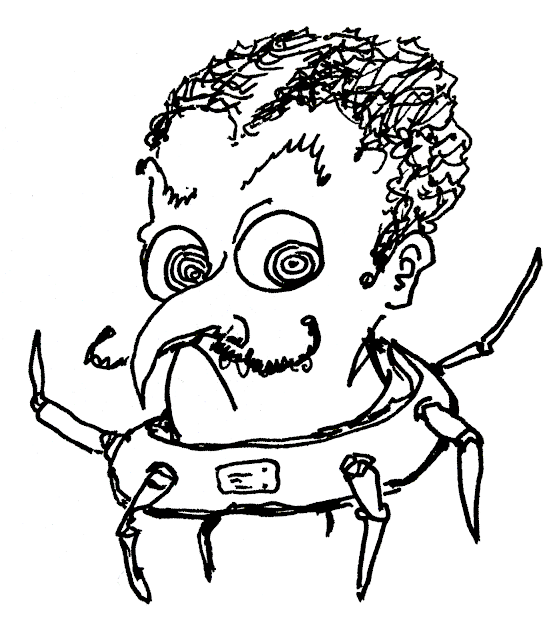 The von Spindelknochen were a strange bunch. Their favourite type of punishment were beheading (so much that they built a special type of chop-off-and-then-roll-to-a-special-moat-outside-the-castle device to speed things up, known as the Head Chopper, and then they had that problem with the necromancer that kept reanimate the skulls for her army and...but that's another story).

Where was I? Oh the von Spindelknochen, yes, strange bunch. They became even stranger when they had a visitor from the future - another von Spindelknochen it turned out, only too late, as you will see - that told all about how to prolong one's life.

Because, the visitor said, you don't really want to live through these medieval times. These dark ages.

The what now, the von Spindelknochen said.

This, the visitor said. The dark ages. Cold castles, diseases, wars, primitive ways of living. The most advanced thing you'll ever encounter in your entire life is a spoon.

Exactly! the visitor exclaimed. Five hundred years from now, humanity will travel across the planet through the skies, cutting clouds in half in large metallic, birdlike machines. Don't you want to experience that? Fast forward another five hundred years and humanity is no longer living on this planet, but on Mars, Venus - even Jupiter! And where I'm from, we've even escaped death itself.

Off with his head, the von Spindelknochen ordered, and within the second the visitor's head painted a blood red elliptic path through the air - and landed perfectly on a metallic disc - much like a tray - with small legs all round, that the visitor had brought with him apparently without anyone noticing.

The small tray started running, but the von Spindelknochen soon caught up with it (it wasn't awfully fast).

Oh the irony, the visitor's head managed to say just before the von Spindelknochen tore it off the tray and threw it out the window (and it was actually reanimated a couple of years later by that same necromancer and...but that's another story).

The tray keeps any head placed on it alive and fully functioning. It's a mechanized, Keep Aliver™-tray (with the optional Spider Legs module attached).

The disc doesn't stop ageing though, something the first generations of von Spindelknochen learned the hard way. Though still alive, they more look like a bunch of tree stumps nowadays.