The Silent City is named so because it is illegal to speak. Foreigners are kicked out, citizens exiled or executed on spot (in most cases exiled since executions are noisy).

Environmental sounds aren't forbidden, but frowned upon (e.g. the sound of the blacksmith working). You should keep such activities on a lower layer, or preferably outside the city.

Silent Language is the official language, a strict sign language restricted to one-hand motions, a leftover from the 37 year old war where you'd want the other hand to always wield a weapon.

The citizens of the Silent City are not deaf.

The Grand Ocularium serves as what other cities would call a library, only here the books are replaced by several silent tellers; sages who can recite information using Silent Language. Books are noisy, turning pages are noisy, climbing ladders retrieving books are noisy.

Built like a wedding cake, the laws of silence are loosen up the further away from the top you get, although the rulers have many spies and watchers.

The lowest layer of the city - where the main gate is located - is called Whisper. You may get away with whispering here. This layer is where most commoners are found, foreign travelling merchants and their ilk.

It's unclear what the real reason for all this is, although an old tale tells about a sage in the Grand Ocularium that revealed that the city acts as a blanket, covering a sleeping baby god. The baby is harmless, but if disturbed, the cry will anger and attract its parents - whatever they may be. 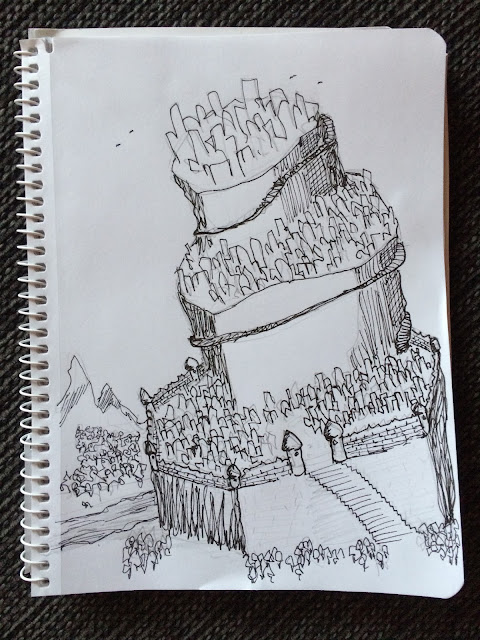