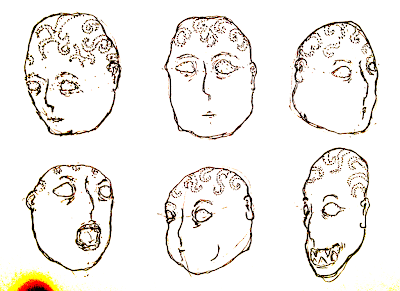 The disturbing Man-Hydra of the eastern woodlands is the kindest creature you'll ever know. It has thirty-six heads and each one loves to listen to gossip (except the thirty-fifth, because of a hearing problem). They're all vegetarians.

All Man-Hydras lose their heads during fall, to prepare the body for the cold winter (they grow new ones during spring). The heads will fall to the ground, and while most of them doesn't survive the drop, the ones that do are sometimes found by travellers and taken care of.

The head of a Man-Hydra is somewhat larger than a normal human head. To survive, it must be fed on a daily basis.

Neglecting the head or treating it badly is considered very evil by the ones aware of these creatures. Anyone causing a head to die will automatically have a price on their head, and will be hunted.

I carried a watermelon
If taken cared of properly and treated with respect, the head of a Man-Hydra have a wide range of properties that not only lonely people appreciate (besides being good listeners). Some of them are listed below: