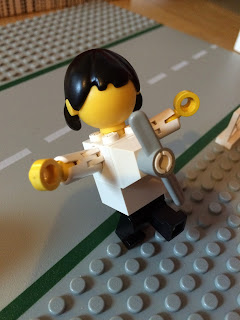 The propeller activates when the Penny crosses a analogue leyline; it will take 1 round to start up and reach full speed, run at full speed for 1d6 rounds, and then shut down for 1 round.

All Pennys are faceless, but have the ability to form emotions using the magnetic emojii-ability (MAGEMO): it may smear mud (or blood) on its face, and then rearrange the particles into face-like expressions. It's unclear if it's aware of what it conveys.

Backtracking the steps of a Penny takes you to a tall, almost abandoned apartment complex, overgrown with (now-dead) CAT87-cables. In one of the apartments on the top floor, the biological dead (but technically still functioning) body of the great video game-modder D-M1C3 (from before the last pseudo-nuke, 530 years ago) can be found in a chair. She's hooked up to an old Amstrad CPC, where a 3D-wireframe of the Propeller Penny is spinning in toxic green (the background is a pause screen of a flight simulator).

Several 3D-printers can be found scattered around the apartment, each one printing one piece of a Penny. The printers are placed so that when the pieces are printed, they click together naturally - and the Penny gets up and walks away.

On a shelf on the left wall, a worn and very old box of the computer game CHUCK YEAGER'S ADVANCED FLIGHT SIMULATOR can be found. It will most likely crumble when touched.

Penny's are drawn to clear hierarchies and loud noises. They never stop.